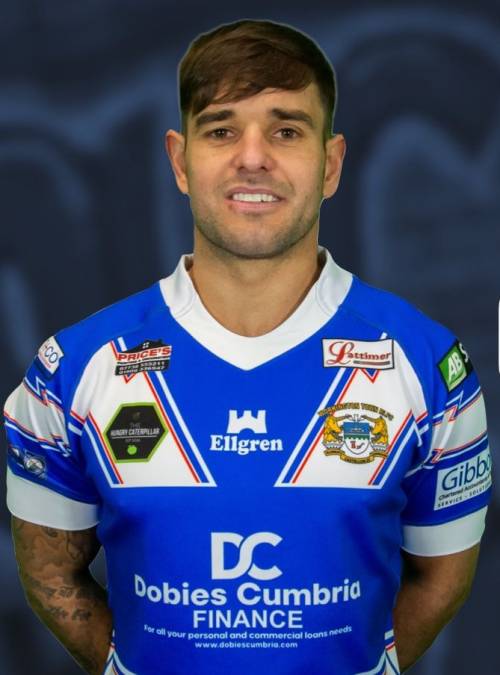 In 2019 Carl Forber surpassed Ian McQourqindale's 40 year old Club Record Points total to become the new record holder by amassing 1813 points, and with a new 1 year contract all agreed that magical figure of 2000 points is well within range.

An experienced Stand-off who is prolific with the boot. Carl played his junior rugby at amateur club Thatto Heath before joining the St Helens Academy set-up aged 16 playing alongside the likes of England star James Graham. He managed to break into the first team in 2004 and played 2 top flight games before signing for the Leigh Centurions in 2005 but after finishing top points scorer for Leigh he made the move to Cumbria for his first spell with Town, signing for the club in December 2006. After 2 successful seasons Carl decided to move closer to home signing for the Blackpool Panthers mid season of 2009. Due to the demise of the Panthers after financial problems Carl headed to the Swinton Lions but the move didnt really work out and a move to Oldham followed. After 1 full season fans favourite Carl returned to Town in 2012 where he has remained ever since. Carl he has chalked up over 300 career appearences and well over 1000 career points.

Carl enjoyed a testimonial year in 2019 and we are delighted that Carl is back in the blue and white for 2020.

Very popular and important member of the squad.

Carl has signed a new 1 year contract taking him into his 12th year at the club, have a great 2022 Carl!